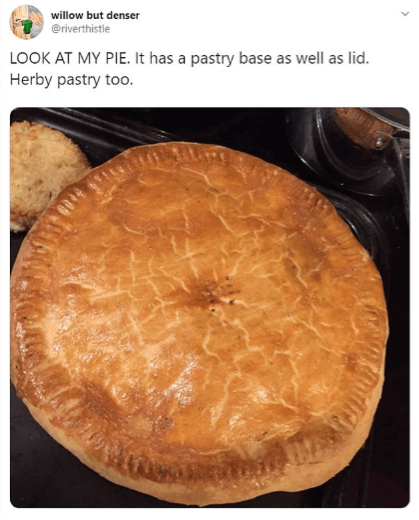 Social media users are left divided over what makes a ‘real’ pie – with purists insisting it must have a pastry top, base AND sides to qualify

Passionate social media users have flooded Twitter with the true definition of a pie, arguing that it must always be completely encased in pastry to qualify – and should otherwise be classed as a ‘stew’.

Just days before British Pie Week 2020 kicks off, a new survey of the nation revealed that 71 percent of Brits agree that sticking a pastry lid on top of meat or veg does not make a pie, ruling out shepherds pie as a ‘true pie’.

As food lovers went online to share their views, Mick Thomas from Lancaster shared a picture of a homemade pie, and said: ‘Just for clarity, pies have a top, bottom and sides… the picture is more a stew with a lid! This is very offensive to Northern pie eaters.’

Meanwhile Helen Tarver from Dorset shared a snap of a pie and wrote: ‘Is it wrong to be thinking of pies already? It is #BritishPieWeek after all. What’s your favourite? And let’s not get started on pies with just a lid #notapie’.

And angry pie enthusiast Andres Arce agreed, posting a picture of his pub lunch and writing: ‘A casserole with a puff pastry lid, whilst nice, is #notapie.

This came as a survey by Pukka Pie revealed that a further 60 percent reckon minced meat dishes topped with mashed potato, such as shepherd’s or cottage pie, should not actually be called ‘pies’.

The research revealed a host of sticking points when it comes to how we enjoy the nation’s best loved meal.

But when it comes to the main event, the survey revealed steak and ale as the clear winner, with 42 percent of the vote.