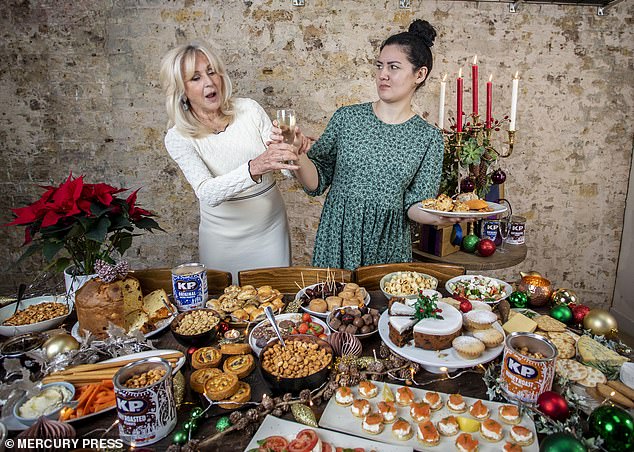 Don’t fill your plate more than twice or sample the vegetarian option if you’re a meat-eater: Etiquette expert reveals the rules you MUST abide by at a buffet during party season

An etiquette expert has revealed the faux pas made by people dining on buffets over the Christmas party season.

Liz Brewer, a UK-based expert on social behaviour and etiquette said that a room full of beautifully displayed foods can make people go ‘a little nuts’.

And with party season in full swing, a new study suggests the Great British buffet is alive and well in the UK, with 77 per cent admitting they love a good spread.

However, you could unwittingly be committing a number of etiquette efforts while you pile your plate high, including helping yourself to the vegetarian option – which Liz insists should be left for those who don’t eat meat.

So how do you avoid bad manners and causing upset and offence?

Expert Liz said there’s a way to dine buffet-style without causing offence and being impolite.

She said: ‘There is something about beautifully displayed food and a room of hungry individuals that makes people go a little nuts.

‘It is often argued a buffet style party is a more casual affair, yet the research reveals that manners are still of upmost importance within this setting.

‘My advice would be never to breathe or cough over the table, and do not scramble to be the first in line. Never hover at the buffet table, it does not belong to you.

‘Don’t indulge in the veggie or vegan options just because you like the look of them. Leave these for those who are dairy intolerant and or vegan.

‘Don’t drink while serving yourself. Leave your cocktail, wine or drinking glass behind when approaching the buffet.

‘Avoid flowy kimono-esque sleeves that may drag into the hummus as you reach for the smoked salmon.

‘And, at all costs, resist the urge to photograph your meal for Instagram, it is regarded as the height of bad manners.’

The concept of eating a buffet, meaning a small side table in French – arose in mid-17th century France, when gentleman callers would unexpectedly arrive at the homes of ladies they wanted to woo.

Their surprise arrival would throw the kitchen staff into a panic and the only food that could be served was a selection of what was found in the cold room.

The Swedes also lay claim to the origin of the buffet with their concept of the smörgåsbord or ‘smorgasbord’ – a side table where one could opt for a pre-dinner drink or snack.

However, the buffet we know and love really took off in Las Vegas, in the 1940 when impresario Herb McDonald created the first ‘All You Can Eat’ buffet, where people could choose from a selection of cheap salads and cold meats as well as expensive seafood.

The goal was to keep people inside the casino longer, where they would spend more money on the tables and the slots.

New research has revealed a host of dos and don’ts for a soiree, with 48 per cent deeming pushing into the queue among one of the rudest things you can do at a buffet table, only second to coughing and sneezing over the table at 58 per cent.

Fighting someone for the last item of food and grabbing something which someone else is reaching for were also cited as top buffet faux pas, along with sending someone else to get more food for you so as not to appear greedy.

The research by KP Nuts, also found Brits believe it only polite to wait for at least five minutes after the food is laid-out, before heading over to help yourself.

The survey found a second trip to the table is okay, but a third is seen as greedy, and 17 per cent of Brits agree that asking someone to go up for you again is totally unacceptable.