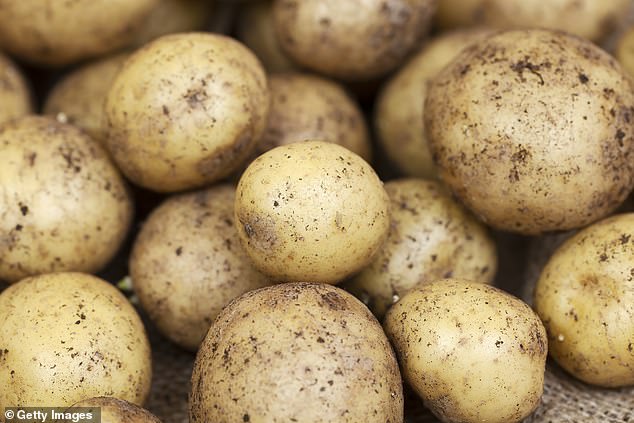 One in 20 Britons reckon potatoes grow on trees – while almost four-in-ten think apples are a tropical fruit that do not grow in the UK, a study out today has found.

A poll of 2,000 Brits found that five percent thought that the humble potato grew on trees, rather than underground, despite being grown in the UK since at leas the 16th century.

Britons now each consume a whopping 102kg each year – amounting to 16 stones of spuds – and around six million tonnes grown in the UK every year.

The study by the UK Mushroom Bureau – which promotes British mushrooms – also found that one-in-twenty Britons also thought that pineapples were grown in the UK.

The majority of pineapples are grown in tropical areas, with the biggest producers in Costa Rica, Brazil and the Philippines.

Oddly, 37 percent of those polled reckoned apples were a tropical fruit – despite around 500,000 tonnes of apples produced in the UK each year – and a further 12.5 million tonnes produced in EU countries.

A total of 15 percent mistakenly thought that mushrooms, normally farmed indoors in the dark, grow underground.

And 11 percent thought green beans were root veggies, which grow underground rather than on vines or bushes above ground.

A total of seven percent reckoned parsnips grew on trees, presumably besides the fabled potato tree.

The study found that 88 percent of those quizzed admitted they had no idea which countries the most common fruit and veg were grown or how it was grown.

A total of 75 percent confessed they never checked labels to find out where their product came from, despite the fact that 60 percent always check the price, 52 percent the best before date and 28 percent the amount of calories.

The study found that 37 percent of Brits said they would be happy to pay more to buy food that came from the UK or Ireland.

Tom Scott, 36, of St Albans, Hertfordshire admitted that he had no idea how mushrooms were grown, but said the Britons who didn’t know how potatoes are grown should go back to school.

The graphic artist said: ‘Everyone should know how potatoes grow – I mean who has ever seen a potato tree?

‘Even kids should know that – but ask me how you grow a mushroom and I wouldn’t have a clue.’

A spokesperson from the Mushroom Bureau said today: ‘This study highlights just how little many people know about where the food they routinely buy is from, revealing Brits know where less than a quarter of the food in their fridge comes from.

‘But, interestingly, it also shows that – when given the choice – consumers would choose local over imports.’