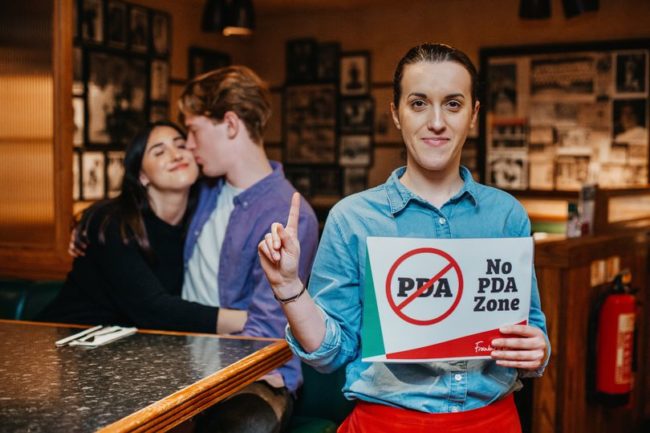 Frankie & Benny’s restaurants across the country will be introducing ‘No PDA Zones’ on Friday, February 14 to stop customers feeling uncomfortable while eating their dinner

If you’re wanting to go out for a meal on Friday night, but avoid all the happy couples celebrating Valentine’s Day, you might consider dropping by Frankie & Benny’s.

The Italian-American chain have decided to introduce designated “No PDA Zones” in some of their restaurants on February 14 to stop over amorous couples putting other diners off their food.

This decision comes after nationwide research revealed that as many as half of Brits feel uncomfortable when it comes to snogging in restaurants.

Around 36 percent of participants, felt that people indulging in PDAs such as kissing, feeding each other and licking each other’s fingers, should save it for when they get home.

Frankie & Benny’s have over 230 restaurants in the UK and a select number of these will feature clearly signposted areas where public displays of affection will not be tolerated.

This will mean customers can tuck into their food, safe in the knowledge that they won’t be faced with a steamy scene on the next table.

However this doesn’t mean that couples should avoid their local Frankie & Benny’s, because the chain will also have designated PDA areas, where you can make out with your loved one without fear of being judged or criticised.

A spokesperson for Frankie & Benny’s said: “Our nationwide research clearly indicates that many Brits are uncomfortable with couples being openly tactile with each other, whilst they are trying to enjoy their meal.

“But we also understand that many couples see Valentine’s Day as the one time of year when they can show physical affection toward their loved ones to show how much they care.

“With this in mind – and to cater to everyone’s needs – we will be creating separate spaces in select restaurants, where couples who want to get amorous are more than welcome and couples who find PDAs off putting can have somewhere to enjoy their meal.”

Loved-up diners can also enjoy a special Valentine’s offer – with Frankie & Benny’s serving up Two Courses for £14.99 between 14th-16th February.