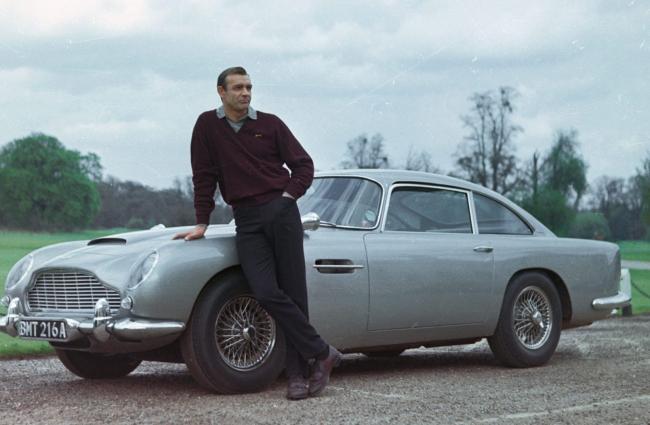 WHEN the four wheels rival the flesh-and-bones for attention in a movie – that’s when a car becomes a superstar.

With the exception of Pixar’s Cars, the Herbie movies and Chitty Chitty Bang Bang, motor vehicles are not normally set up to be the main attraction on the silver screen.

And it is James Bond’s elaborate rides prepared by Q on his globe-trotting adventures that have hit the spot.

It is Daniel Craig’s sleek sliver Aston Martin DB10 which featured in the Bond film Spectre that topped the poll – with one in four favouring the car which was introduced by director Sam Mendes as “the first cast member”.

The DB10 was developed specifically for the film with Aston Martin chief creative officer Marek Reichman leading a design team working closely with Mendes “to create the ultimate car for the world’s most famous spy”.

It was a much older model, the classic DB5 driven by Sean Connery in the 1964 007 blockbuster Goldfinger that came a close second in the poll of 2000 people.

It became among the best-known cars in the world thanks to special effects expert John Stears, who modified the DB5 for use in the movie.

Although Ian Fleming had placed Bond in a DB Mark III in his novel, Stears persuaded the company to make its DB5 prototype available.

To promote the film, the two DB5s were showcased at the 1964 New York World’s Fair, and it was dubbed “the most famous car in the world”.

Another 007 car is ranked seventh on the list. The ‘part submarine’ Lotus Esprit S1 Wet Nellie was Roger Moore’s ride in 1977’s The Spy Who Loved Me. Tesla and SpaceX founder Elon Musk purchased the original submersible vehicle several years ago with a plan to restore it into a working submarine once again.

And Musk said in the summer that it was technically feasible to make a working version for sale, though he did say that “the market for this would be small — small, but enthusiastic”.

A spokesperson for the Discovery Channel which commissioned the study said: “This research reveals the strength of feeling that exists for Brits about their cars. Almost half of the nation sometimes loves their car more than their other half, yet many are hugely embarrassed by the state of their motors.”

Among the more surprising omissions from the list is the Batmobile, one of the most iconic on-screen vehicles of all time.

The “hero car” of the movie was featured in a famous car chase scene in which the drivers, with McQueen himself at the wheel in many shots, screeched around the streets of San Francisco.

With a wild and hidden history, the Mustang was locked away for most of its life before finally coming out of hiding in 2018. And it is now slated to cross the auction block with no reserve this month at the Florida collectors sale, Kissimmee 2020 It could very well be the most expensive Mustang ever sold in history and is expected to top the $2.2m paid for the one-of-a-kind-prototype 1967 Shelby GT500 Super Snake, with no movie fame, sold at the 2019 auction.

In joint fourth place came Will Smith’s Porsche 911 Turbo 3.6 from his cop caper Bad Boys and Michael Knight’s talking Trans Am KITT from Knight Rider, which scored higher that another 80s classic, Doc Brown’s 1981 DeLorean from Back to The Future.

Also making the list were the famous VW Beetle from the 1968 classic The Love Bug, as well as Bo and Luke Duke’s General Lee, Dukes of Hazzard.

And Chitty Chitty Bang Bang, the star of the 1968 British-American musical adventure fantasy film of the same was picked by one in ten to take tenth place.

Style was the key reason why people chose their favourite car (44%), however 28 percent chose their dream car because it had “personality” and nine percent went for it because it would attract the opposite sex.

And 73 percent of us admit that we’ve dreamt about driving a car from a film, while over four in ten people admit that they’ve actually been influenced by films when purchasing a car.

We are a long way from owning our dream car, as the data found the average Brit’s car is worth £9,800, however as a nation we would be prepared to spend a staggering £77,000 on the car of our dreams.

According to the data 58 percent of people believe driving their dream motor would change their life.

Of those people, half of them believe that driving would become a pleasure rather than a chore, four in ten would simply feel cool and 23% believe they’d become more attractive.