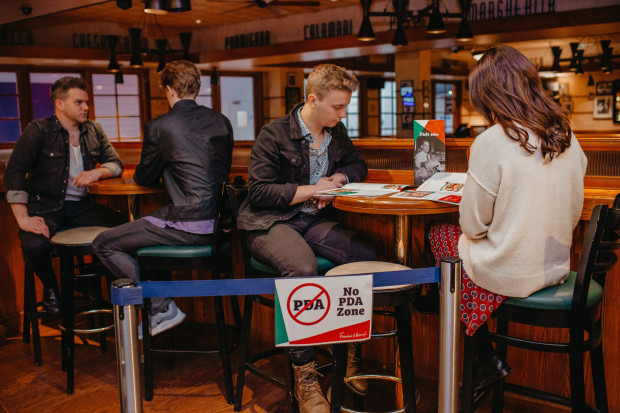 PASH-ION KILLER: Frankie & Benny’s is banning customers from snogging in its restaurants on Valentine’s Day

The Italian-American chain is setting up designated “No PDA Zones” – public displays of affection – in branches to stop other diners feeling uncomfortable.

The ban comes after research by the firm found that almost half of customers feel that couples engaging in over-zealous kissing, feeding each other and licking each other’s fingers should do so in private.

The chain surveyed 2,000 people ahead of the biggest date-night of the year, and found that 36 per cent thought PDA is a restaurant was “unacceptable”.

Up to 35 per cent reckoned that snogging on busses was gross, and 34 per cent believed heavy petting at public swimming pools was a no go.

But overly affectionate couples hoping to tuck into a romantic bowl of Frankie & Bennie’s spaghetti Bolognese on Cupid’s day won’t be stopped from eating at the restaurants.

Instead, they’ll be asked to sit in a specific area of the branch that’s been designated to PDAs where they can eat without “fear of being judged or criticised”.

Although, if we’re honest, singling out the romantic couples in this way does seem to open them up to judgement.

Of course, it’s a bit of a stunt and the signs will only be put up on February 14 – snogging over a romantic meal at any table will be acceptable on any other day of the year.

The No PDA Zones will be placed in just 10 of the 230 restaurants around the UK, including ones in cities like Leeds, Manchester, London, Glasgow, Liverpool, Birmingham, Bristol, Newcastle, Edinburgh and Cardiff.

Exact details of what branches will be affected will be announced on February 13. In the meantime, you can find your nearest branch here.

A spokesperson for Frankie & Benny’s said: “Our nationwide research clearly indicates that many Brits are uncomfortable with couples being openly tactile with each-other, whilst they are trying to enjoy their meal.

“But we also understand that many couples see Valentine’s Day as the one time of year when they can show physical affection toward their loved ones to show how much they care.”