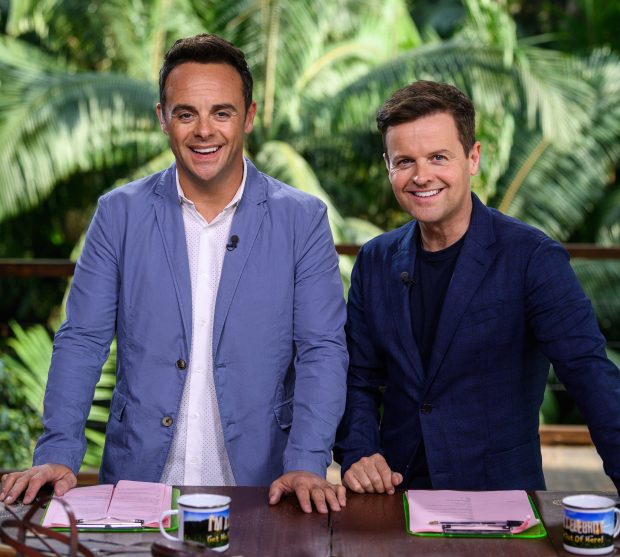 ANT DECKED: Dec Donnelly voted sexier than Ant McPartlin after distracting fans with his ‘huge bulge’ on I’m A Celeb

DECLAN Donnelly has been judged to be sexier than his I’m A Celebrity co-host Ant McPartlin in a poll of fans.

It comes after viewers were distracted by the 43-year-old’s ‘huge bulge’ on screen as he posed after watching Jacqueline Jossa and Nadine Coyle debate who was the hotter of the pair.

A poll conducted by Ginger Research found that 59 per cent of 2,000 people asked said that Dec was hotter than Ant.

Results showed that Dec won the day in every region of the UK bar Leicester, where locals there insist Ant is the more handsome.

The closeness of the vote mirrors the views in camp – where Nadine revealed she was in Team Dec while Jac said she preferred Ant.

The 27-year-old EastEnders star said: “I didn’t realise they were good looking and then we said: ‘What one would you have?’ She said Dec and I said Ant at the same time.”

Asked why Nadine liked Dec, the 38-year-old singer replied: “There’s something really cute, cheeky and sassy about him.”

As the camera went back to the studio, the hosts struck a sexy pose before Dec joked: “I’ve said it before and I’ll say it again – we’re not just pieces of meat guys.”

However, Dec’s trousers in the clip caught the attention of many viewers at home, who took to Twitter to comment on the latest snake in the jungle.

One wrote: “#ImACeleb is dec smuggling food into the camp down the front of his trousers, massive bulge.”

Another tweeted: “Nice posing tonight Declan! Or should we call you ‘Dec trousersnake?'”