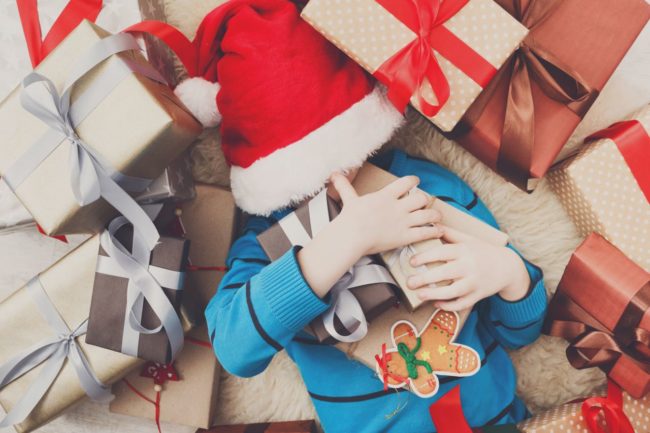 How much is too much to spend on children at Christmas?

They’re making a list and they’re checking it twice. The problem is what’s on the list is adding up to quite the tidy sum with parents looking to spend well over £100 on each of their children this Christmas.

On the whole Brits will splurge a whopping £33.3 billion on gifts this festive season, but it’s the nation’s smalls who are seeing the bulk of the spending.

According to an interactive calculator developed by money.co.uk under 16s will get at least £129.79 for their largest present, while children over 16 can expect a little less, coming in at around £105.99.

Another study by Nationwide Building Society suggests a lot less will be spent on kids (average of £67), but suggests people will typically spend nearly two weeks’ worth of wages on Christmas as a whole.

And it isn’t just parents who are looking to spoil kids this year, grandparents will be forking out over the festive period too.

Recent research has revealed grannies and grandads will splash out a huge £324 on Christmas presents for their grandchildren this year.

The study, by SunLife, found that the average British grandparent has four grandchildren and is set to spend £81 on each of them, totalling an impressive £324.

Despite over half (55%) admitting that the financial cost is worth it as they love watching their grandkids open their presents at Christmas, it is causing grandparents to feel the burden with over a third (36%) admitting they feel under huge pressure to get the best possible gifts for their grandkids.

There’s no doubt there is a lot of parental pressure to spend at this time of the year, but this can have a knock-on effect on finances.

As a result of last year’s Christmas spending, nearly one in five (18%) said they struggled financially, while one in 10 (10%) ended up deep into their overdraft. And 7% said they started 2019 in significant debt.

Guy Simmonds, head of current account customer management at Nationwide, said: “The cost of Christmas can quickly mount up, with people spending an average of two weeks’ salary funding the festive period.

“It’s incredibly easy to spend more than we can afford, which is why many of us start the new year in debt.

“Planning is vital to sensible spending. We would encourage people to set a budget they can afford and stick to it.”

And that could mean scaling back on presents, even for children.

According to recent statistics by the British Toy and Hobby Association and NPD Group, the average UK child aged nine or under received £350 worth of toys for Christmas 2016.

Salman Haqqi, personal finance expert at money.co.uk said: “Christmas is a really expensive time for families across the UK. With high expectations to meet and costs mounting up, it’s easy to fall into debt. Budgeting is the best way to ensure you avoid unmanageable debts and take control of your finances.”

Of course there are ways to give your children a fantastic Christmas without splashing too much cash.