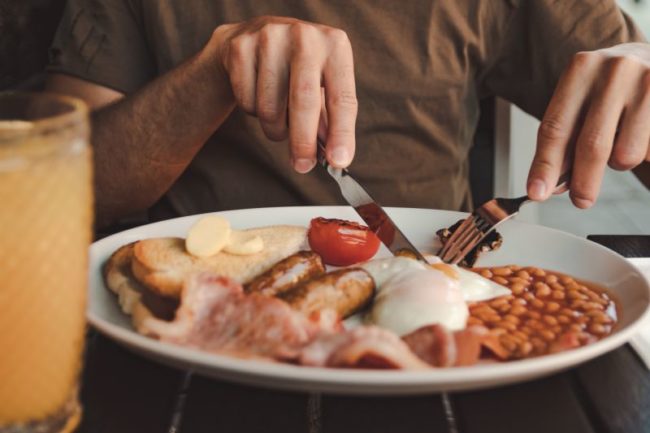 One in five under 30s have never eaten a fry-up

A fry up has been a staple part of English tradition for as long as we can remember.

According to new research, though, the full English breakfast is dying out as it turns out that one in five people under 30 have never tried it.

It’s not the first food staple that has gone out of favour with millennials. Rhubarb crumble, spotted dick and figgy pudding are dying out, too.

With under 30s switching to a healthier lifestyle, it’s possible that the levels of fat in greasy fry ups just aren’t cutting the bacon anymore.

It’s not just the grease that’s likely to be putting health conscious millennials off, either.

Breakfast foods from poached egg to avocado on toast have risen in popularity in recent years, giving us more options than ever when going out for breakfast.

That, teamed with a growing number of people turning vegan and vegetarian could be putting the classic fry-up at risk.

27% of 2,000 Britons surveyed said that the worst part of a full English breakfast is the black pudding.

Some people might argue that black pudding isn’t a standard part of a fry-up, but, according to the English Breakfast Society, it is.

One in five British under 30s said they believed fry-ups were associated with heart attacks with the same number associating the once popular breakfast meal with obesity.

With new obesity statistics coming out all the time, it’s unsurprising that younger generations would shun the meal for a healthier option.

Recent studies into obesity noted that half of UK parents felt they weren’t “fit enough” to keep up with their children.

It’s clear that health and fitness concerns are at the forefront of the younger generation’s minds.

So, what do millennials have for breakfast instead?

71% of under 30s would rather tuck into smoked salmon and scrambled eggs, smashed avocado on toast and oatmeal pancakes for breakfast.

“According to the results, avocado, scrambled eggs, salmon and oatmeal pancakes are replacing the humble fry-up in the nation’s hearts.” Ellie Glason, Director of polling firm Ginger Research, who commissioned the study, said.

“The study found also that over half of young adults believe Britain is becoming more health conscious and shunning traditional English meals like fried breakfasts, bangers and mash and pie and chips.”

This research is backed up by the large amount of companies bringing out vegan versions of much-loved classics.

Galaxy has even launched three new vegan chocolate bars to keep up with the demand of the new millennial lifestyle.